Dutch fugitive wanted for murder has been detained 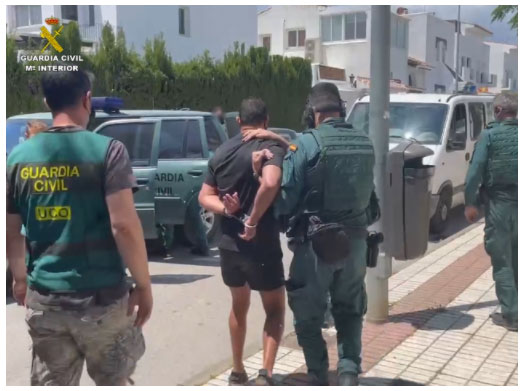 Guardia Civil has arrested one of the leaders of Dutch organized crime gang in San Pedro de Alcántara (Marbella).

The detainee is accused of having planned the death of a member of a rival gang in the Netherlands, although by the end another person was murdered by mistake.

The 40-year-old detainee is a Dutch citizen and is accused of having ordered the murder of the leader of a rival gang in the city of Amsterdam. However, due to a mistake by the executors, they ended the life of a well-known DJ in the city while he was in his private parking lot with his wife and daughter, who were badly injured.

Seven people were arrested in the Netherlands and sentenced to more than 30 years in prison, although the person behind this was in an unknown locations.

The fugitive, aware of the seriousness of the crimes committed, was actively hiding in Spain employing extraordinary security measures in his daily life, changing his place of residence every two months approximately.

The 40 years-old man now detained in Spain, is also accused by the Dutch authorities of planning the murder of NF in Berlin (Germany), which was the real objective of the previously exposed murderer and residing in the same apartments as the deceased in Amsterdam.

This person, who is currently in prison for a multitude of crimes and who miraculously escaped from this new assassination attempt, is considered by the Dutch authorities as one of the main leaders of organized crime in Holland in recent times, directly linked with the well-known Clan of the Kinahan of the Irish mafia, which already tried to free NF in a transfer to a court through the use of explosives.