If you can't explain it simply, you don't understand it well enough. 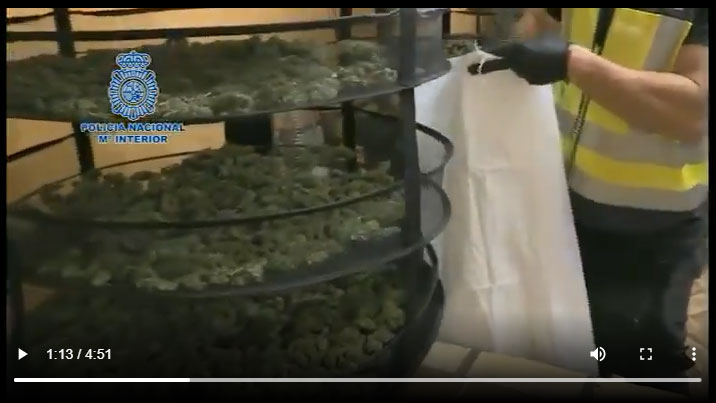 Policía Nacional have dismantled eight indoor plantations of marijuana. 15 people have been detained as alleged perpetrators of the crimes of drug trafficking, membership in a criminal organization and fraud of electricity.

300,000 € in cash, 4 firearms, 10 vehicles, 3 motorcycles and a huge amount of tools for cultivation have been intervened; lamps, filters and air conditioners have been seized.

The investigation began by discovering a group of people allegedly dedicated to the indoor cultivation of marijuana and the sale of large quantities of buds from these plantations. Those investigated belonged to an organization segregated into two branches, whose union was their leaders, who maintained continuous contact to discuss issues such as how to cultivate, the sale price in the illicit market or even the sale of the production between themselves. Each branch consisted of eight and seven people respectively, who had their clearly defined role within the organization.

The detainees had bud dryers in rooms set up for this purpose in their homes, as well as vacuum packers to prepare the merchandise for sale in large quantities. They also had houses where they exclusively kept the money, normally guarded by older people, where subordinates and debtors came to collect their “salary”, as well as storage centres for all the indoor growing infrastructure (air conditioners, filters, light bulbs, fans, etc.) for replacement in case of breakdown or installation of new plantations.

The organization had a very marked modus operandi, always travelling in two or three vehicles, one that served as a “shuttle” (a security vehicle that warned of possible police controls) and the other that transported drugs. Its activity was constant since the beginning of the investigation, detecting up to three harvests in each of its plantations.

Publicity:
Free Advertising
Newchic: Whole Site Up to 20% OFF for All Items.
Phone numbers and cheap calls around the world