The measure of a man is what he does with power.

One of the main hashish trafficking organizations has been dismantled 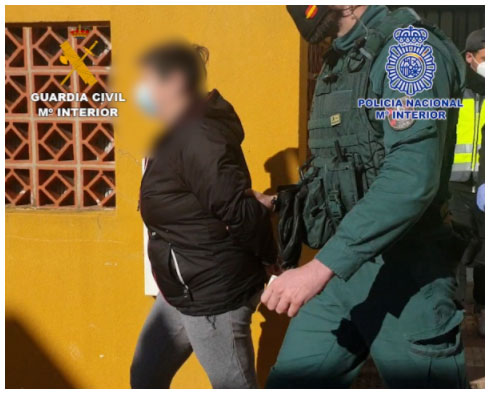 Guardia Civil and Policía Nacional have arrested 21 people and searched 16 houses in Algeciras (Cádiz), Los Barrios (Cádiz) and Estepona (Málaga). The head of this organization was an old acquaintance of Policía Nacional and Guardia Civil (“Fuerzas y Cuerpos de Seguridad del Estado”), nicknamed “el Nimo”. He was the lieutenant of a drug-trafficker who fled from Justice and is known as "Messi”. The Police have arrested both him and his closest collaborators.

Furthermore, 4 stolen vehicles, 40,000 packs of smuggled tobacco, 1,000 litres of petrol, a drone with a thermal camera and more than 18,000 euros have been seized.

This criminal organization has brought large quantities of hashish with speed-boats (“narcolanchas”) from Morocco. Then they have transported it in advanced vehicles to safe places or “nurseries” to, finally, distribute it throughout the national territory and to other European countries.

During the weeks leading up to the exploitation phase of the operation, agents detained 17 members of the organization and intervened more than 6 tons of hashish. Likewise, they recovered 9 stolen vehicles that, presumably, were used to transport drugs, as well as 8,500 packs of tobacco and 700 litres of gasoline that were used to supply the speed-boats (“narcolanchas”).

Publicity:
Newchic: Whole Site Up to 20% OFF for All Items.
Friendz Travel: Save Up To 50% Off Flight & Hotel Deals.
Palladium: Sales up to 50% off.
Phone numbers and cheap calls around the world
Free Advertising
Chemist Click: 10% off all first orders.