SOME writers have so confounded society with government, as to leave little or no distinction between them; whereas they are not only different, but have different origins. Society is produced by our wants, and government by our wickedness; the former promotes our happiness POSITIVELY by uniting our affections, the latter NEGATIVELY by restraining our vices. The one encourages intercourse, the other creates distinctions. The first is a patron, the last a punisher. 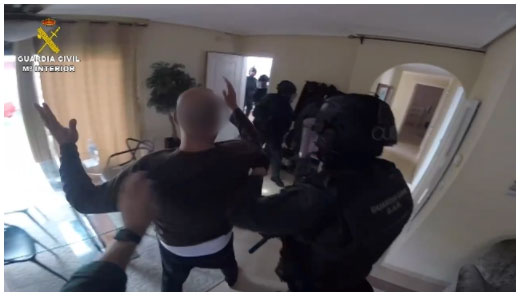 Guardia Civil has arrested 8 people whom are members of one of the most important and active criminal organizations dedicated to trafficking large quantity of hashish from Morocco to Spain. Among those arrested is a Spanish citizen of Moroccan origin (MLM) considered one of the most prominent drug traffickers operating between Morocco and the Andalusian coasts and another Italian (PV) who is wanted by the Italian authorities for his membership in the Camorra Napolitana, with several pending legal cases in Italy mainly for drug trafficking and "mafia-type association".

They have been trafficking drug from Morocco to Spain by "narcolanchas" and fishing boats, distributing it for storage in the provinces of Málaga, Cádiz and Almería, from where they distributed it throughout several other European countries.

Several house searches have been carried out in Marbella and Estepona, where some of the arrest were carried out too.

About 5 tons of hashish, more than € 200,000 in cash, jewellery, vehicles, electronic and computer material of interest for the investigation have been seized.

Publicity:
Free Advertising
Phone numbers and cheap calls around the world
Newchic: Whole Site Up to 20% OFF for All Items.