Dictatorship naturally arises out of democracy, and the most aggravated form of tyranny and slavery out of the most extreme liberty.

The issue of theft of electricity was brought up by representatives of property owners at the latest community meeting on 13 April 2019, but it was never mentioned in the Minutes (“Acta”). Photo evidence of illegal connection was presented too. The illegal connection to one of the apartments was in place from June 2018 until it was sold and refurbished in the spring of 2021.

Two different apartments were mentioned during the community meeting; Bajo-A in Block 2 and 1-D in Block 6.

According to a property owner, a person living in Block 2, it was the overweight extra worker that started to live in an apartment in Block 2 (Bajo-A), soon after he begun to work at the community in May/June 2018. The apartment was repossessed years before and it seems to have been “forgotten” by the bank. The extra worker and the caretaker were seen fiddling around with cables above the celling outside this apartment.

It was apparently the President of the community that had suggested this man to be hired during the previous general community meeting on 24 March 2018 and it was said that he was going to be cheaper for the community due to his discapacity. When the expense of this worker was presented in April 2019, then the cost was 332% over budget!

One of the two young men with identical Pitbulls, who has grown up within the community, had got in and occupied the apartment (1-D) in January 2018 with a group of friends. He had up to this point of time lived with his family in a penthouse in Block 3, until they finally were evicted after living there without paying any rent for many years.

One needs a key to open the doors where the meters are located to be able to make an illegal connection there. The caretaker of the community has got a key to these doors. 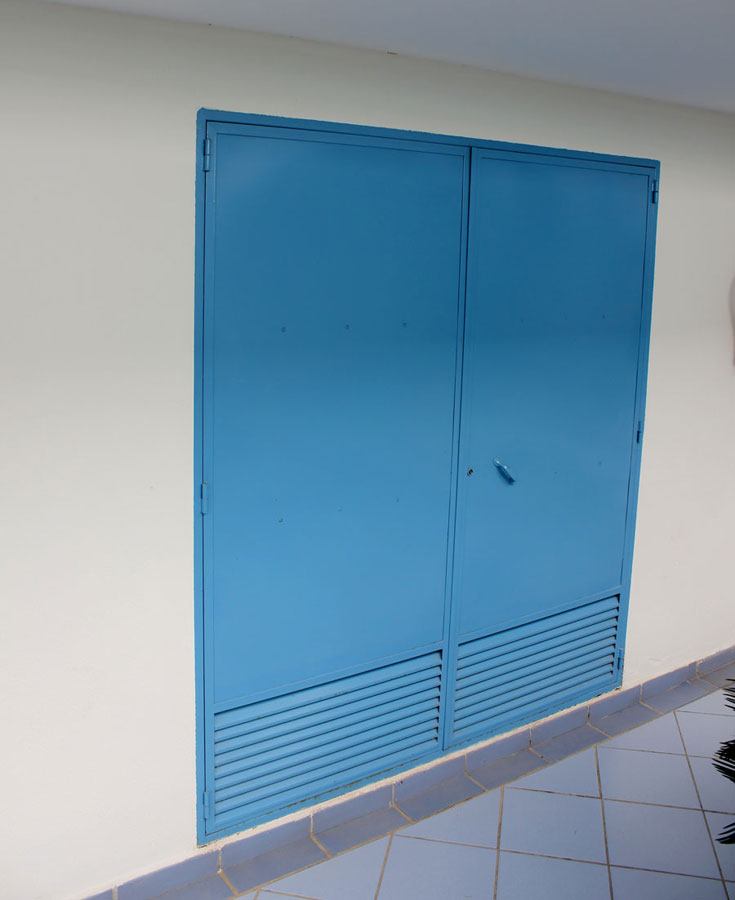 The community's expenditures on electricity

The community was expected to save 6.000 EUR annually on electricity by changing the lightening to LED, according to the Secretary-Administrator. 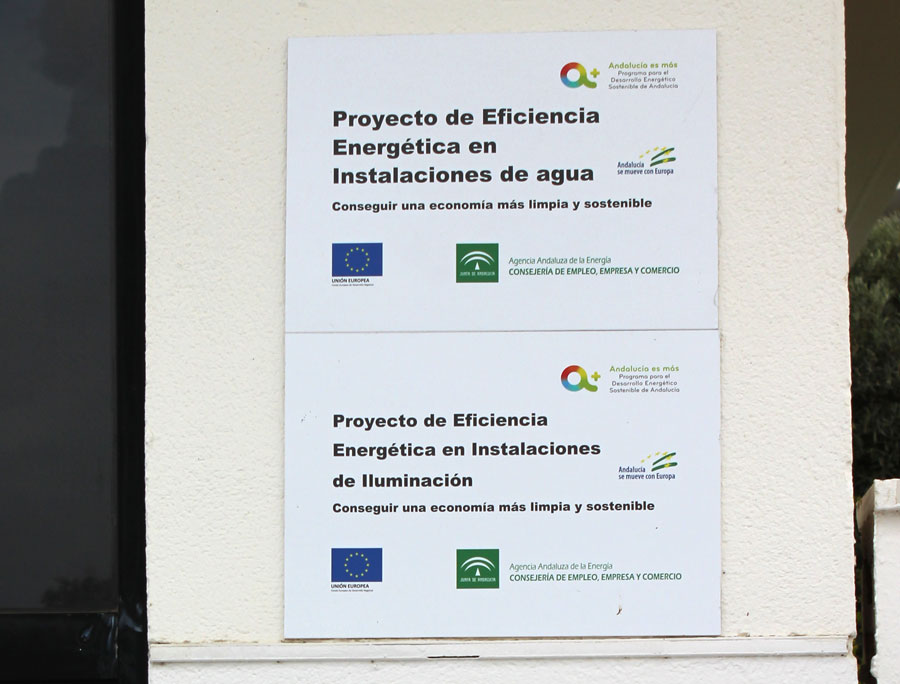 The work to change to LED-lightening is understood to have been carried out during the summer of 2018.

It could have been expected that the saving of electricity should have been noticeable from 2019, but that is not the case. Instead, the community spent remarkable more on electricity 2019, then during other years.

* The President of the community never made a call to a community meeting at the beginning of 2020, which she should have done. No budget has therefore been approved by the property owners for year 2020.

As already mentioned, one or several apartments were illegally connected to electricity during the summer of 2018. Is this the reason why the community spent 18.4% over budget on electricity year 2019, when the expenditure on electricity was supposed to have been less due the change to LED-lightening?

Trouble with the squatters

There has been lots of trouble with the squatters, especially with the squatters in Blocke 6, where they for sure made an illegal connection to electricity. There has been drug parties with lots of people from elsewhere. They were trafficking packages that were dug down in the private garden during the middle of the nights. Afterwards they usually had loud parities where the smell of drugs even went through the wall to the people living next door.

Soon after the apartment (1-D) was occupied by squatters, people living next door to the squatter apartment were threatened by .

“Jefe” is the man with the rare illness of being very blind in periods and in other periods he appears to be able to see. The day when “Jefe” knocked the door next door and delivered his threat, must have been a day when he could see, because he did wear transparent glasses instead of his usual dark sunglasses and even put his finger in a nasty way on the face of the man who opened the door.

“Jefe's” unacceptable behaviour took place only a few days before the general community meeting on 24 March 2018. The attendants of the meeting were informed about what had happened and the police report (“Denuncia”) that had been filed.

“Jefe” is renting an apartment in Block 6 where he lives with his family. Before the squatters got hold of the repossessed apartment (1-D) in Block 6, he used to sit by the entrance or inside of Block 6 smoking dope with the two young men with two identical Pitbulls and lots of other youngsters that did not belong to the community. “Jefe” spent lots of time with the youngsters in the squatter apartment (1-D) where they were smoking dope and talking loud day and night. He seems to have tried to make life impossible for the people living next door to the squatter apartment after the police report was filed (“Denuncia”). The night before the case was coming up in court, “Jefe” and the other people in the squatter apartment (1-D) were extremely very loud, which continued until aprox. 05.00 in the morning when “Jefe” finally walked back to his apartment. The session in court begun 11.15.

“Jefe” lost the case despite the disturbance and the false story he presented. A copy of the sentence was sent to the Administration of the community.

The association of Administrators of communities of property owners (Colegio de Administradores de Fincas - CAF) writes in their magazine (Revista el Administrador - No 85 Q3 2020) how Administrators should act in case of squatters. Even though, it's the affected property owner that must initiate legal procedures against the squatters, the community of property owners (Comunidad de Propietarios - C.P.) can also act in case the squatters are carrying out annoying, unhealthy, harmful, dangerous or illegal activities within the community, or activities that are harmful to the property or prohibited in the statues. Even if they don not explicitly mention the law, it is Ley 49/1960 (propiedad horizontal), CAPÍTULO II, Arículo séptimo that is the legislation at hand.

Illegal connection of electricity, threats and disturbing behaviour should be reason for the President and/or the Administrator to take legal action. 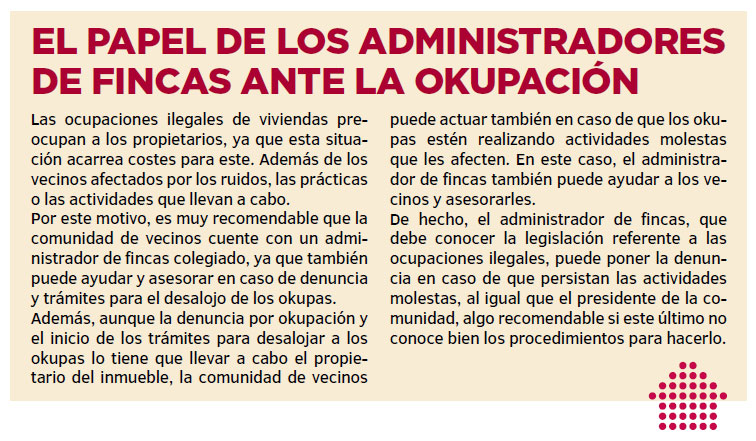 A representative of a property owner, who has been badly affected by squatters next doors, asked during the community meeting on 13 April 2019 if the community had taken any actions against the squatters. The answer was Nothing!

The Minutes (“Acta”) from the community meeting does not show that the issue of theft of electricity was brought up at the meeting. It should definitely have been mentioned in the “Acta” since it also was brought up under Other issues (“Ruegos y Preguntas”).

Are the Secretary-Administrator and the Presidents (President and Vice President) of the community trying to hide negative issues like squatters and theft of electricity from the property owners?

The Administrator has to:

The owner and the occupant of the apartment or premises are not allowed to develop in it or in the rest of the property activities prohibited in the statutes, that are harmful to the property or that contravene the general provisions on annoying, unhealthy, harmful, dangerous or illicit. (Artículo 7.2, apartado 2, Ley 49/1960)

The president of the community, on his own initiative or that of any of the owners or occupants, will require those who carry out the activities prohibited by this section to immediately cease them, under warning of initiating the appropriate legal actions. (Artículo 7.2, apartado 2, Ley 49/1960)