Men willingly believe what they wish

The importance of understanding economy 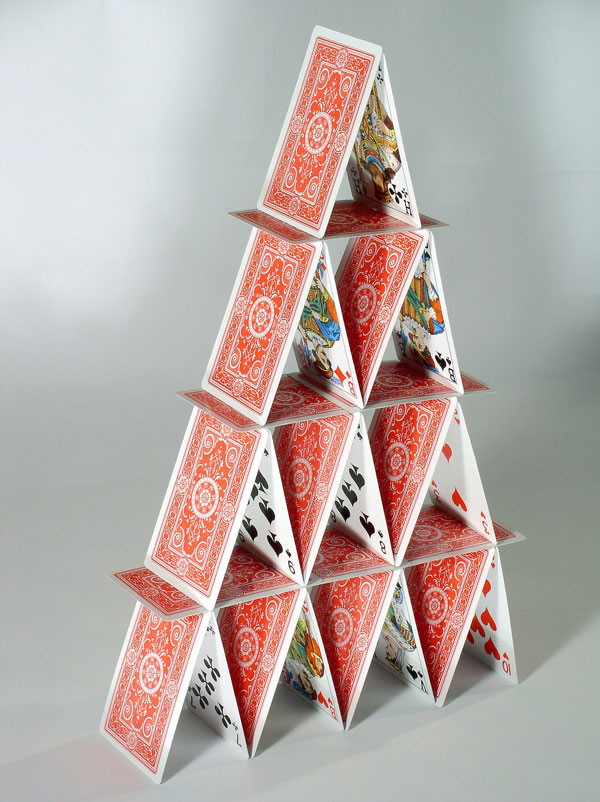 We seem to live in a mad time that reminds of a “house of cards”. The credit crunch back in 2008 was basically an issue of debt. The “solution” was to create more debt, manly through Quantitative easing (QE) by the Central Banks. The European Central Bank (ECB) has implemented a very aggressive QE-programs with negative interest rate and massive purchases of bonds.

The central banks has continued with their very aggressive monetary policy during the whole business cycle, as there was a crisis even during the boom. This is against all economical common sense, which students learn early when studying economy.

The cheap money floating around create problem with wrongly accumulation of resources. A consequences is that fixed assets like properties and equities has taken off. The steep increase in property prices has pushed up the rents and made it harder for people to by their first property.

Imbalances in the economy will sooner or later get corrected. It is therefore more important then ever to understand how the economy really works to be able to survive times of turbulence.

Rankia's interview with Martin Armstrong is well worth watching to get a better idea of how economy really works.

Posts in discussion: The importance of understanding economy

The Venezuelan people struggle to cope with the toxic effects of hyperinflation, severe debt and chronic food and medicine shortages, as Venezuela - once the wealthiest country in the region - is mired in the worst economic crisis in its history.

So how does a country boasting the world's largest oil reserves find itself on the brink of economic ruin?

It's the country's very history that sheds light on what has gone so drastically wrong in Venezuela today.

When Hugo Chavez was elected president in December 1998, he promised to tackle corruption and poverty.

He used Venezuela's rapidly growing oil wealth to set up social programmes, known as the Misiones, with the aim of eradicating poverty and reducing inequality. It was, many claimed, a much-needed intervention in the entrenched disparity between Venezuela's rich and poor.

As Chavez strived to transform the nation with what he called 21st century socialism, his populist policies began to take a more radical turn. He nationalised industries and bloated state bureaucracy at great national expense, all funded by high oil prices and unchecked borrowing. Venezuela became saddled with record-high levels of debt.

By the time of his death in March 2013, Chavez handed over both the reins of power to his handpicked successor, Nicolas Maduro, as well as the poisoned chalice of an economy about to implode.

"Maduro has inherited a legacy of oil dependence at a period when Venezuela has gone bust, and at a time where the oil price has gone bust," says Professor Julia Buxton, author of The Failure of Political Reform in Venezuela, adding that Maduro "has simply not addressed any of the problems or the legacy that he inherited from President Chavez."

"The collapse of economic activity makes this period, from 2013 onwards, the largest recession in Western Hemisphere history - significantly larger, almost twice as large as the Great Depression of the US," says Ricardo Hausmann, former Venezuelan minister for planning.

The IMF predicts that in 2018, the Venezuelan economy will contract by 15 percent, and inflation will reach 13,000 percent.

But will those now tasked with governing a struggling nation learn any lessons from its troubled past?

VICE on HBO looks at factors that led to the 2008 financial crisis and the efforts made by then-Treasury Secretary Henry Paulson, Federal Reserve Bank of New York President Timothy Geithner, and Federal Reserve Chair Ben Bernanke to save the United States from an economic collapse. The feature-length documentary explores the challenges these men faced, as well as the consequences of their decisions.

Martin Armstrong is a self taught financial forecaster that created the first functional AI algorithm to model financial cycles. He is a world renowned economist and the creator of the Economic Confidence Model, founder of Princeton Economics and has advised investment funds, governments, and central banks around the world. He is known for calling financial and political collapses to the day, particularly the 1986 crash and the Lebanese civil war. This talent led him to rock the proverbial geopolitical apple cart and became embroiled in a decade long legal battle landing him in prison for more than ten years. We recommend the documentary The Forecaster to get the whole story, as it's long and complicated. You can find his work at