The secret club of "Junta Directiva" 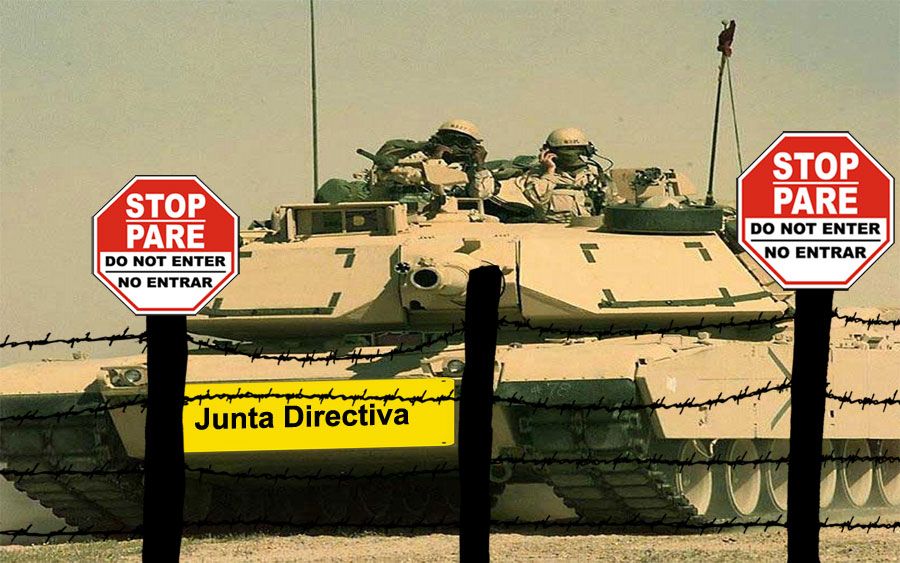 The property owners are kept in darkness about the whereabouts of the Governing Board (“Junta Directiva”). There are no Minutes (“Actas”) presented from their meetings and the property owners are not even provided with contact details of its members, who are supposed to represent all property owners. Poor organisation and poor leadership bring poor performance.

In a decent run community one will communicate the contact details to those who are elected as members of the Governing Board of the Community ("Junta Directiva"), as all property owners can communicate with any of its members. Those people that are elected are elected for the term of one year. It is a good practice when the representatives have been elected during the annual community meeting that new elected members present themselves in front of the property owners that have attended the meeting.

Unfortunately, this is not how it works at C.P. Terrazas del Rodeo. The Secretary-Administrator that chairs the annual community meetings does not ask for suggestions for the positions, which it is a professional way to deal with it. During the last annual community meeting that was held on 13 April 2019, then the Secretary-Administrator only quickly asked if the property owners were happy with the representatives, without giving much chance to come up with suggestions of replacements. The result was that status quo was maintained where the same people that have been members of “Junta Directiva” for years could continue without any “fresh blood” coming into the group.

According to the Status of the community (“Estatuto”), “Junta Directiva” should have 11 members: President, Vice-President and 9 representatives (“Vocales”) from each of the nine blocks (“Bloques”).

The position for “Bloque 1” has been vacant for years. It is established in the Status of the community (“Estatuto”) that “Junta Directiva” consist of 11 members, which makes it incompatible for the vice-president to also hold the position of the “Vocal” of “Bloque 9”. It is therefore strange that the Secretary-Administrator does not make any effort to fill this position to comply with the Status of the community (“Estatuto”).

In a community like C.P. Terrazas del Rodeo, where there are many property owners are foreigners, then it is also relevant to inform what languages the representatives can speak. There are very few of the members of “Junta Directiva” that can speak any other languages then Spanish. 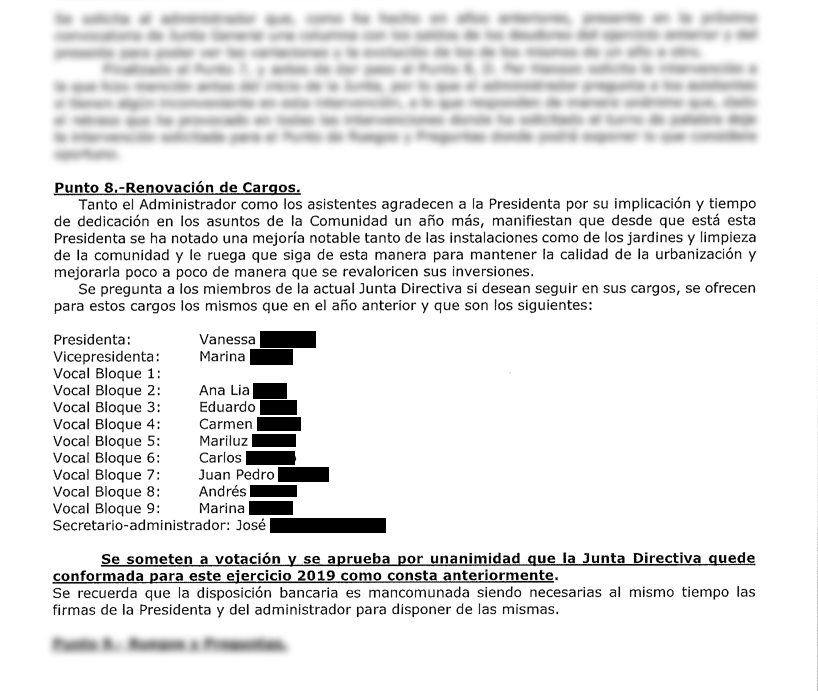 The community is believed to provide the President with a mobile phone. A property owner who happen to know the number to the President's mobile phone, sent a WhatsApp message and asked for the contact details (e-mail addresses and phone numbers) to the rest of the member of “Junta Directiva”.

It did not take the President more then 3 minutes to reply that the contact details to the members of “Junta Directiva” could not be shared with the property owners, due to Data Protection!

The President seems to have got in touch with Rosa Fernández, who is the assistance of the Secretary-Administrator, since it did only take her 11 minutes to send the property owner an e-mail where she repeated that contact details to the members of “Junta Directiva” could not be disclosed due to Data Protection. (Read!)

Without awareness of the e-mail sent by Rosa Fernandez, the property owner sent an e-mail to the Secetary-Administrador, José Urbano, and asked for the contact details (e-mail and phone number) to the members of “Junta Directiva”. (Read!)

The property owner received a reply the following day, which was sent by Rosa Fernandez, where she quoted and referred to what she had sent the previous day (Read!)

The property owner sent another e-mail to the Secretary-Administrator on 22 July 2021 where the following three different issues were brought up:

The General Data Protection Regulation (GDPR) is a European Union Regulation from 27 April 2016 (2016/679) and replaced the Directive 95/46/EC when it became effective in 2018. One of the big differences that was that emails was included in the EU Regulation 2016/679.

The GDPR is basically regulating the collection and processing of data.

Everyone responsible for using personal data has to follow strict rules called ‘data protection principles’. They must make sure the information is:

There is stronger legal protection for more sensitive information, such as:

Each individual have the right to find out what information the government and other organisations store about oneself.

It has been noticed in Spain that the The General Data Protection Regulation (GDPR) is misused to minimize transparency. Transparency is vital to combat corruption.

Publicity:
Phone numbers and cheap calls around the world
Newchic: Whole Site Up to 20% OFF for All Items.
Free Advertising