Judge of a man by his questions rather than by his answers. 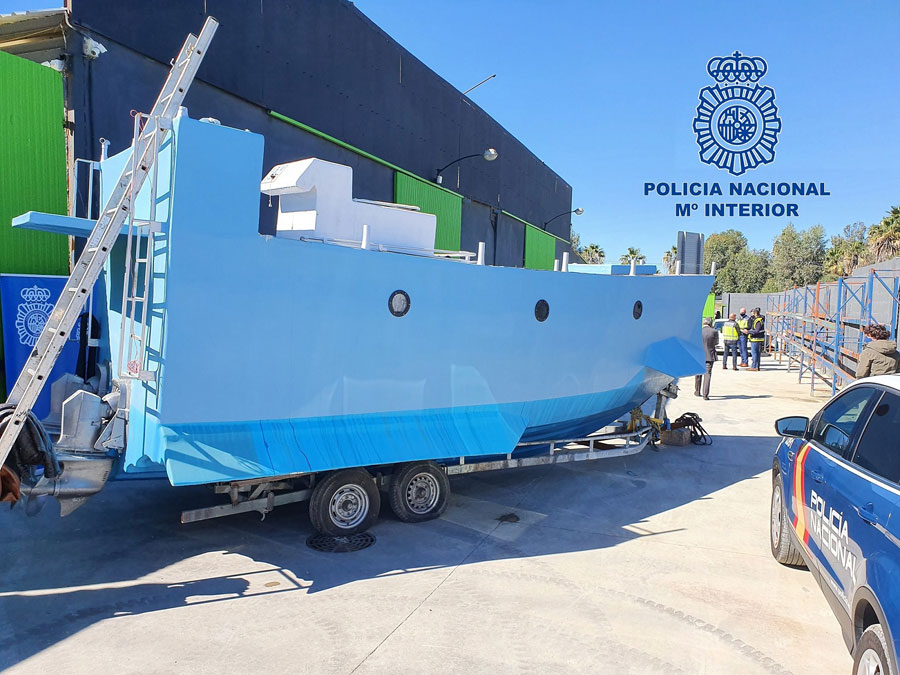 Policía Nacional have detained 52 people in a macro-operation against an important international organization dedicated to producing, adulterating and distributing narcotic substances. The operation has been carried out in collaboration with the authorities of five foreign countries coordinated by EUROPOL.

The semi-submersible vessel was located in a warehouse in Monda and was deigned and made by a 55-year-old Cuban, called “Fidel”, who has lived in Marbella since the drug trafficking business by the Galician coast dried up with the fall of the main drug lords.

The arrests and seizures is part of the macro-operation “Ferro”, carried out against an international criminal organization, allegedly dedicated to the production and distribution of narcotic substances. 47 searches have been carried out in Tarragona (6), Barcelona (11), Gerona (3), Málaga (11), Castellón (4), Valencia (2), Murcia (7), Cádiz (1), Granada (1 ) and Badajoz (1). A clandestine laboratory for the processing of cocaine hydrochloride, as well as an indoor marijuana plantation with 1,200 plants, have been dismantled. More than 400 kilos of cocaine, 600 kilos of hashish and more than 100,000 euros in cash have been intervened.

This police operation have involved more than 300 agents, as well as the collaboration of the Colombian, Dutch, Portuguese authorities, the British NCA, the US CBP and EUROPOL.

Operation ferro was carried out in several phases

Investigators identified an organised crime group, composed of Spanish, Colombian and Dominican nationals, involved in large-scale trafficking of cocaine, hashish and marijuana. The criminals were operating from Spain, specifically Cataluña. Between April to December 2020, a number of important cocaine seizures linked to this criminal group were made in Colombia. A total of 2 900 kilos of cocaine were seized.

Days prior to the operation in Spain, the authorities intercepted a trailer truck in Lisbon (Portugal), heading for the United Kingdom, which was transporting hidden, inside hydromassage baths, 100 kilos of hashish and 100 kilos of marijuana.

In November 2020, police officers in Spain arrested the leader of this criminal network in Tarragona, alongside 13 of his accomplices.

In February of this year, another branch of this organised crime group was targeted in Costa del Sol. They observed that its main activity consisted of drug trafficking through the Strait of Gibraltar and, in this sense, they intercepted a shipment of hashish in Salou (Tarragona) destined for France and Italy. Four individuals were arrested in Tarragona. A shipment of 583 kilos of hashish on its way to France and Italy, and 12,000 euros in cash were seized.

Five house searches were also carried out in the province of Málaga, where a semi-submersible vessel was found in a warehouse in Monda (Málaga). The boat – the first ever of its kind seized on European soil, was still in construction when it was found. The craft was 9 meters long and could have been able to transport up to 2 tonnes of drugs.

One of the main targets was arrested in February at the El Prat airport in Barcelona as he was trying to flee to the Netherlands. As a result of this arrest, a warehouse was searched Barcelona which led to the seizure of 300 kilos of cocaine.

A clandestine drug laboratory was discovered in Barcelona next to an indoor cannabis plantation with over 1,150 plants. A 15-meter long speedboat belonging to this criminal network and loaded with 7 000 litres of gasoline was also seized in the region of Murcia.

At the end of February, the remaining members of the criminal network were arrested. Some 6,000 litres of drug precursors were also seized, destined for a clandestine laboratory in Murcia.