We are twice armed if we fight with faith. 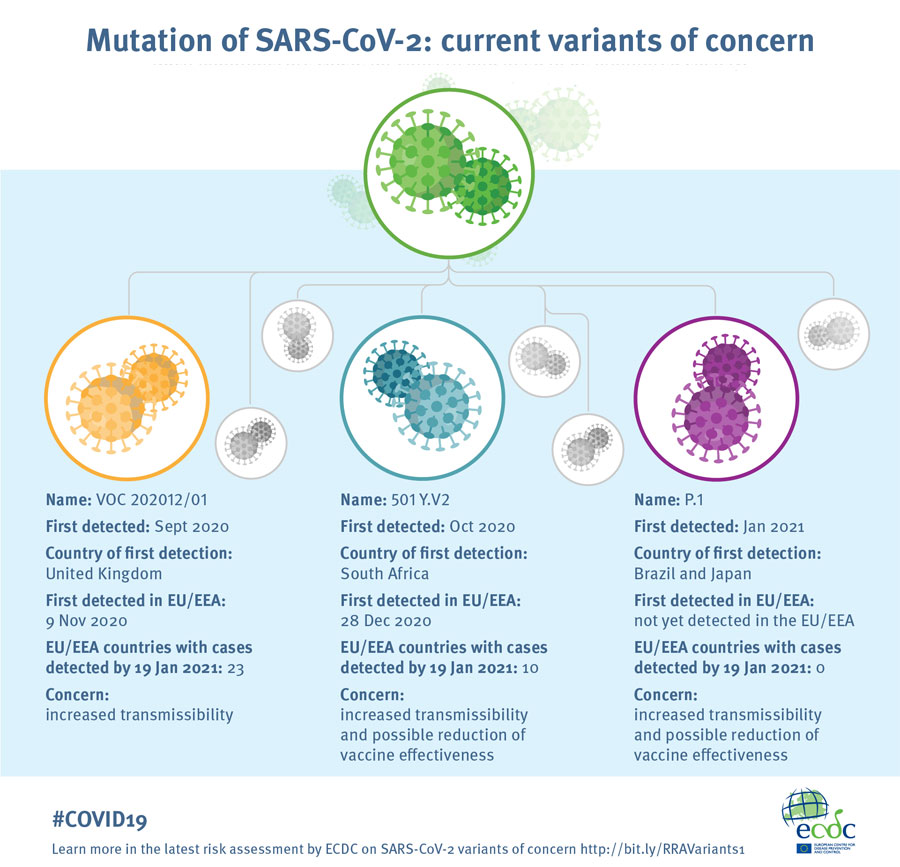 Viruses constantly change through mutation and variations due to evolution and adaptation processes. Mutations of SARS-CoV-2 that have caused Covid-19 have been observed globally. While most emerging mutations will not have a significant impact on the spread of the virus, some mutations or combinations of mutations may provide the virus with an increased transmissibility or the ability to evade the host immune response.

The three virus variants that were first identified in the UK (VOC 202012/01, lineage B.1.1.7), in South Africa (501Y.V2) and in Brazil (variant P.1) are considered to be of concern because of mutations which have led to increased transmissibility and deteriorating epidemiological situations in the areas where they have recently become established.

The mutation that was identified in the UK in December 2020 has become the predominant variant circulating in the UK. It is characterised by a significantly increased transmissibility, which has contributed to increases in incidence, hospitalisations and pressure on the healthcare system since the second half of December 2020. Several new analyses are reporting increased disease severity in people infected with VOC B.1.1.7. Based on these analyses, there is a realistic possibility that infection with VOC B.1.1.7 is associated with an increased risk of death, but it should be noted that the absolute risk of death per infection remains low. There are some important limitations to the data on which these analyses are based, because a relatively small number of people were included in the analyses. When more data is being collected and the position will become clearer over the coming weeks.

The mutation that was identified in South Africa in December 2020, where it is now the most prevalent variant, indicate that this variant may also have an increased transmissibility. However, as for VOC 202012/01, at this stage it is uncertain whether the 501Y.V2 variant causes a change in disease severity.

The mutation that so far only has been identified in Brazil, and in travellers from Brazil, reported in Japan and South Korea, is currently experiencing an upsurge in COVID-19 cases.

Based on the new information, the risk associated with the introduction and community spread of variants of concern have been increased to high/very high by European Centre for Disease Prevention and Control (ECDC), due to an increased transmissibility that is likely to lead to an increased number of infections. This, in turn, is likely to lead to higher hospitalisation and death rates across all age-groups, but particularly for those in older age groups or with co-morbidities.

There might be a reduction in the vaccine effectiveness for the mutations discovered in South Africa and Brazil, according to ECDC.

Publicity:
Friendz Travel: Save Up To 50% Off Flight & Hotel Deals.
Chemist Click: 10% off all first orders.
Free Advertising
Newchic: Whole Site Up to 20% OFF for All Items.
Phone numbers and cheap calls around the world
Palladium: Sales up to 50% off.