Does "mascarillas" make a difference? 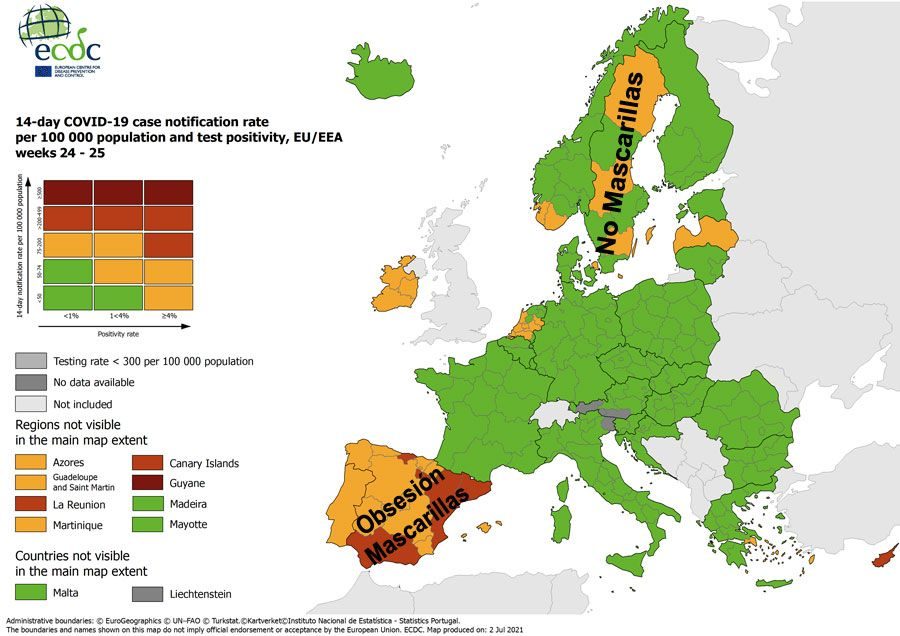 One could expect that there would be a big difference in the infection rate between the two countries, but this is not the case.

Why forcing the public to wear face masks ("mascarillas") if there are no proofs that it make much of a difference?

The Spanish government even spent the taxpayers money on TV publicity where they emphasised the important to wear face masks ("mascarillas") even at home when meeting relatives during their Christmas holidays.

The government decided already on 24 June 2021 to alter their decree from 29 Mars, in such a way that the use of face masks ("mascarillas") in outdoor spaces will no longer be mandatory from 26 June, as long as a minimum distance of at least 1.5 meters can be maintained between people, except for groups of cohabitants.

It was on 18 June 2021 when Prime Minister Pedro Sánchez said this will be the last weekend that we will have to wear face masks ("mascarillas") in the open air.

The regional government of Andalucía had already made it mandatory to wear face masks ("mascarillas") even outdoors within Andalucía even when one was on one's own during the previous summer (from 15 July 2020), regardless if there were any people nearby or not. It was first from 29 March 2021 when it became mandatory to wear face masks ("mascarillas") outdoors in the entire Spain, but it did not last for that long.

The president of the Junta de Andalucía, Juanma Moreno (PP), expressed irritation with Pedro Sánchez announcement, due to lack of dialogue and co-governance between the Prime Minister and the autonomous regions.

According to Juanma Moreno, there is still months ahead where face masks ("mascarillas") will have to be mandatory and have to be worn at certain places.

The Government of Andalusia is studying where the use of face masks ("mascarillas") will still be mandatory, e.g. for those who are enclosed or in public transport.

According to the European Centre for Disease Prevention and Control (ECDC) medical face masks is believed to only have a small or moderate effect to prevent COVID-19. There is no reliable proof of effectiveness for the public to use non-medical face masks, face shields/visors and respirators.

The evidence regarding the effectiveness of medical face masks for the prevention of COVID-19 in the community is compatible with a small to moderate protective effect, but there are still significant uncertainties about the size of this effect. Evidence for the effectiveness of non-medical face masks, face shields/visors and respirators in the community is scarce and of very low certainty.

(ECDC: Use of face masks in the community by non-ill individuals)

There does not seem to be any particular difference in the infection rate between Spain and Sweden, which should have been the case if the use of face masks among the public would have prevented the spread of COVID-19.

Posts in discussion: Does "mascarillas" make a difference?

Steven replied the topic: #2 1 week 6 days ago
The obsession about face masks make the politicians really stand out as ridiculous!